Kazakhstan’s Economy Heads for Growth in 2013

ASTANA – Over the past two decades, Kazakhstan has made significant progress in transforming its economy to a more transparent, less regulated, more market-driven business model attractive for foreign investment.

The country works hard to diversify by developing new industry sectors to generate alternative income streams separate from its wealth of natural resources. It aims to become one of the world's top 50 countries for business by 2020 and one of the 10 leading financial centres in Asia.

Economic integration remains among the main priorities of Kazakhstan's foreign policy and an essential part of the country's vision of economic development. The recent creation of the Customs Union and Common Economic Space with Russia and Belarus confirm Kazakhstan's openness and commitment to being a responsible member of the global community.

President Nursultan Nazarbayev considers creation of the Customs Union with Russia and Belarus a response to the global financial crisis.

Since the launch of the Customs Union on January 1, 2010, trade between the three countries has been growing rapidly and each country has enjoyed an expansion of trade with its CU partners. Kazakhstan's annual volume of trade with Russia and Belarus has increased by almost 80 percent in the period 2009-12. Starting from 2009, total trade among the three countries has increased by more than 25 percent in 2010 and by 67 percent in 2011 (compared with 2009).

Viktor Khristenko, chairman of the Board of the Eurasian Economic Commission, said the CU's rate of growth in trade between its three member states is twice as big as the increase in the volume of its foreign trade. In the first nine months of 2012, the GDP growth in the member nations of the Customs Union was 4.5 percent.

Kazakhstan has successfully emerged from the difficult times of the recent global crisis. Thanks to the government's anti-crisis programme and the strategy of the Samruk Kazyna Sovereign Wealth Fund, Kazakhstan escaped economic recession. But it has not been an easy road, and one of the biggest challenges facing its economy going forward is to sustain the current levels of economic growth.

The global financial crisis proved to be a real test that served as a good lesson for Kazakhstan. The country's banking and real estate sectors were particularly exposed to the adverse impact of the global turmoil. Kazakhstan's economy has, nevertheless, endured these challenging times in a resilient manner and managed to remain on a positive growth direction. It recorded GDP growth of only 1.2 percent in 2009, but this returned to pre-crisis levels of 7.3 percent in 2010 and 7.5 percent in 2011. (Figure 1)

"Last year, Kazakhstan's GDP reached more than $186 billion. If you sum up the total GDP of our neighbouring countries in the south, which are Uzbekistan, whose GDP amounts to $45 billion, Kyrgyzstan, Tajikistan, Turkmenistan and even Azerbaijan, the total economy of all our southern neighbors combined does not reach the level of our economy," said Askar Yelemessov, chairman of the Board of Directors of Troika Dialog Kazakhstan. 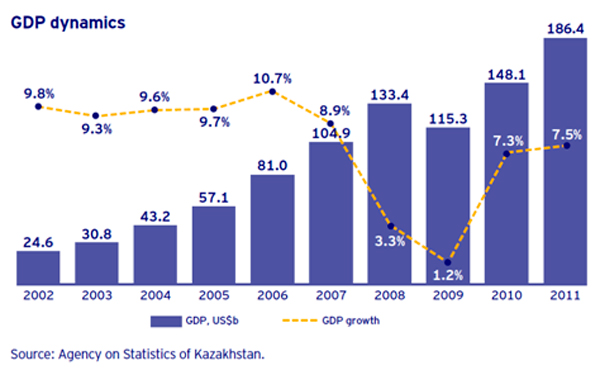 The Ernst & Young Rapid-Growth Markets Forecast said Kazakhstan was one of the top three most rapidly growing economies in the world in terms of annual GDP growth between 2000 and 2010. The state's GDP per capita has increased more than 15 times in less than 20 years, growing from $700 in 1994 to more than $11,000 in 2011.

By 2016, Kazakhstan's GDP per capita is expected to reach $15,000, compared with the current level of $11,300, and Kazakhstan will be classified as a "high-income economy" according to the World Bank. (Figure 2) 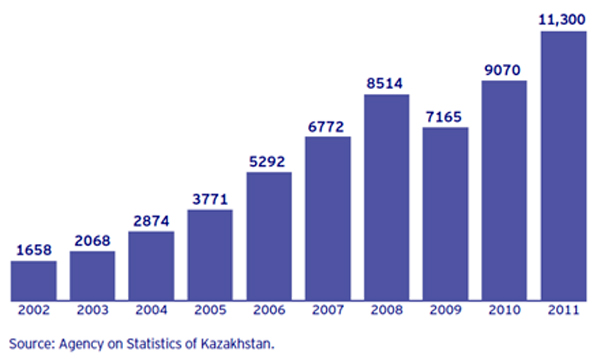 In August 2012, the government of Kazakhstan issued its main economic forecasts. The Ministry of Economic Development and Trade made public its forecasts of the main macroeconomic indicators for the period until 2017.

The government expects real GDP to grow by 6.0percent - 6.1 percent in 2012-14, accelerating to 7.6 percent in 2015, and moderating subsequently to between 6.0 percent-7.0 percent. These forecasts are based on the assumptions of global growth of about 4 percent per year, the price of oil staying at $90 per barrel, and the prices of metals staying flat at 15 percent below the current level. Domestic demand is expected to grow by about 6.5 percent - 6.8 percent a year, as in 2011-2012, when the GDP was largely driven by internal demand, while export-oriented sectors performed poorly. Inflation is expected to remain within the 6 percent to 8 percent corridor. 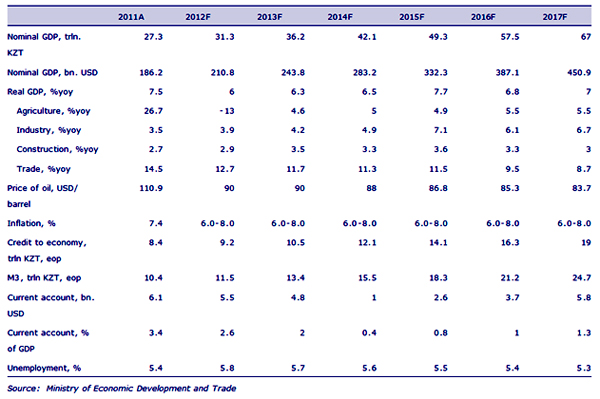 GDP growth in 2012 was mainly led by the expansion in the services sector thanks to the strong growth of wages and loans, while growth in goods production was negative (Figure 4).

Figure 4. Contribution of goods and services to GDP year-on-year growth

The agricultural sector contracted by 9.1 percent year-on-year in the third quarter of 2012 compared with the same period in 2011. This cut 0.4 percent from third quarter growth. As the government had reported earlier, this was the result of a poor harvest this year compared with the exceptionally high levels of the 2011 harvest.

The gross output of the construction sector increased by 4.4 percent year-on-year in the third quarter of 2012, but it was a relatively small component of GDP, so its contribution was only 0.3 percentage points. (Figure 5)

According to the Ernst & Young Rapid-Growth Markets Forecast, in the next three years, Kazakhstan's investment attractiveness will increase significantly. The industrial sector, agriculture and infrastructure remain the most attractive spheres for investment. The country's macroeconomic stability and its potential for further GDP growth are also raising investors' confidence.

The UN Commission on Trade and Development in its World Investment Report 2012, specifically singled out Kazakhstan as the largest destination for foreign investment among the so called land-locked developing countries (LLDCs) over the past few years and posited that such investment in Kazakhstan will only grow in the future.

Kazakhstan has successfully implemented a number of key regulatory and structural reforms to preserve and strengthen its political and macroeconomic stability. Foreign investments have been a key to rebuilding and reorienting the national economy, with cumulative foreign direct investment (FDI) over the past 20 years amounting to almost $150 billion. Thanks to foreign investors' capital and expertise, Kazakhstan has reinforced its position as a global energy power with ambitious, yet sustainable plans for the future.

FDI inflows into Kazakhstan have recorded strong results over the past decade. Kazakhstan's success in attracting FDI can be attributed to its vast natural resources and the commitment of the country's leadership to welcome FDI and promote the country's stable economic growth, as well as developing other potential sectors of growth, such as agriculture, logistics and transportation.

The Kazakhstan Statistics Agency says the country's resource sector is likely to remain the principal recipient of FDI/foreign debt in the third quarter of 2012.

A foreign direct investment breakdown by sector is available for the first quarter of 2012 only. The data reveal that there were several non-resource sectors which received significant amounts of FDI (note other category in last column on Figure 7). In the first quarter of 2012, the FDI inflow in communication services totaled $1.6 billion, in transportation and logistics it reached $200 million, in production of electronics $78 million, in construction $48 million, in electric power generation $46 million and in food production $43 million.

So far, Kazakhstan has not been able to overcome its main fundamental difficulty – high oil prices resulting from the growth of exports and imports (Figure 8). 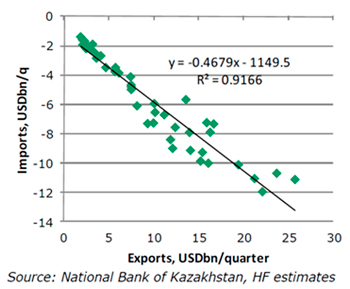 There is a high correlation between oil prices and investment income outflow from Kazakhstan because of the high proportion of foreign companies operating in Kazakhstan's resource sector. They produce 73 percent of oil production. Kazakhstan also imports significant amounts of services for resource companies, which has resulted in a $2.0 billion per quarter balance of services deficit. In the last five years, however, there was a notable stabilization of this number. It became less correlated with the Brent price, and therefore with exports.

Although Kazakhstan has only been independent since 1991, it has generated significant momentum not only in attracting foreign investment, but also in terms of country competitiveness. The government is currently implementing large-scale reforms aimed at increasing productivity and competitiveness and encouraging balanced social and economic development. Kazakhstan is in the process of modernizing its institutions, educational system and infrastructure to provide a solid foundation for continued economy growth.

The latest World Bank and International Finance Corporation Doing Business 2013 Report reveals progress achieved by Kazakhstan in creating a business-friendly environment. It was ranked 49th out of 185 countries surveyed.

Especially impressive is the country's improvement in ease of starting business indicators. Here Kazakhstan moved from 55th place to 25th in one year. To compare, Russia is ranked 112th, while the closest Central Asian country on the list, Kyrgyzstan, is in 70th place.

The findings of the Doing Business Report are supported by other studies. The 2012–2013 Global Competitiveness Report (GCR) published by the World Economic Forum puts Kazakhstan at 51st place in its overall ratings. Russia is ranked 67th. Remarkably, Kazakhstan is ranked 16th in the world in the all-important category of macroeconomic stability, an indication that despite the adverse impact of the 2007–09 global financial and economic crisis, the country has managed to recover quickly and expand economic activity.

The investment climate in Kazakhstan is rated very highly in the World Bank's ratings which are very important to investors. Kazakhstan's FDI inflows and its exports are still highly concentrated (more than 70 percent) in natural resources and this is the main sector for investments. Kazakhstan is important to world energy markets because it has significant oil and natural gas reserves. With sufficient export options, Kazakhstan could become one of the world's largest oil producers and exporters in the next decade. Currently, Kazakhstan takes 11th place in the world among oil reserves and 17th place among natural gas reserves.

Kazakhstan's rich endowment in natural resources has played an important role in its economic development. However, the country is diversifying away from an overdependence on extractive industries. The government follows a policy of diversifying economic development, strengthening entrepreneurship and holding an open and constructive dialogue with investors. The government understands that the development of new economic sectors cannot be achieved without attracting foreign investment. Today, the task is to bring foreign investment and expertise into emerging sectors.

To achieve that goal, Kazakhstan has made significant strides in creating a favourable legal and operational environment for domestic and foreign investors. As a result, it was ranked 10th in the world in the "protecting investors" indicator and 28th in enforcing contracts in the Doing Business Report. It is also showing steady improvement in providing access to credit for domestic businesses. In 2011, Kazakhstan was listed as 97th in the world in this area. This year, it has risen to 83rd place.

Kazakhstan, therefore, has significant growth potential on the macroeconomic level. While the prices for energy resources are stable, the national economy will be stable too.

"Against the background of ongoing economic and social changes, we firmly believe Kazakhstan is well positioned to meet future challenges and opportunities and to deliver on the objectives and targets we have set," Deputy Prime Minister Kairat Kelimbetov said recently.