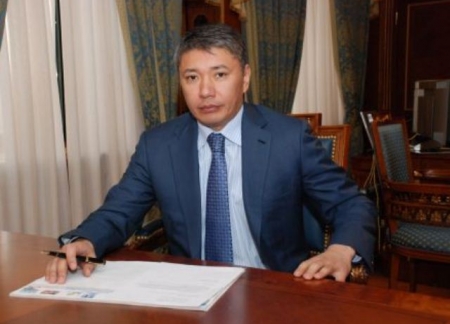 Interview with Talgat Yermegiyayev
Chairman of the Board, NC Astana EXPO 2017 JSC

Mr Yermegiyayev, extensive preparations have begun for the EXPO 2017 exhibition. What will the City of the Future be like?

In accordance with the detailed development plan for the city of Astana, the planned location for the EXPO village is the square created by Qabanbay Batyr Avenue, Hussein ben Talal Avenue, Orynbor Street and Ryskulov Street. The planned territory will cover 173.4 hectares – 25 hectares for the exhibition complex itself, 48.4 hectares for parks and avenues, and the remaining 100 hectares for outdoor facilities and the EXPO village.

Have the architectural plans been confirmed? Who will carry out the construction?

On 18 February 2013, an international architecture competition for the best design idea for the EXPO 2017 exhibition complex was announced, including for the building that will be the symbol of EXPO 2017 in Astana. The project owner is NC Astana EXPO-2017 JSC. At the moment, preparatory work is ongoing, raw data is being collected, the design competition has been announced, and we are also studying the experiences of previous editions of the EXPO exhibition. After detailed analysis a feasibility study will be developed, and this will be presented to the Government Committee for examination and approval.

As the facility will be of international importance, some specific conditions for the competition have been developed:
- A conceptual solution for providing modern utilities infrastructure for the EXPO facilities based on international practice, as well as energy-saving using renewable energy sources
- International standards of environmental protection
- An integrated security and monitoring system; anti-terrorism measures, both for EXPO facilities and for transport infrastructure, that meet global practice and standards
- Construction solutions for the project must make maximum possible use of modern building and composite materials
- Fundamentally new solutions for interior and exterior decoration using modern finishing materials

Lots of small and mid-sized business representatives are currently awaiting the start of preparations for EXPO 2017 – how can they get involved at this stage? Is there potential for the Kazakhstani business community to take part in the construction of EXPO facilities?

After we have concluded the results of the international competition to choose the best design idea for EXPO 2017, and also during construction of the EXPO facilities, we plan to call on small and mid-sized business representatives to develop design specifications and estimates.

The domestic business community, including small and mid-sized business representatives, will design and commission construction projects, receive exhibitors and ensure the functionality of the whole complex in general.

Construction of exhibition facilities will begin after the design specifications and estimates have been developed and confirmed in accordance with the requirements of the Republic of Kazakhstan's building codes (approximately during the first half of 2014).

A National Plan to organise EXPO was adopted in January, in which a coordinating role was secured for NC Astana EXPO 2017. At the moment, at what stage are preparations for the EXPO in Astana?

The National Company's main task from 2014 to 2017 will be developing, protecting and implementing the content of the registration file, designing and building infrastructure and facilities for the EXPO 2017 venue, and carrying out promotional and brand-building work.

Kazakhstan's victory in the competition to hold EXPO 2017 is only the first step towards holding the exhibition. The submission stage has taken place, and now we are moving towards the key step – registration for the exhibition. Kazakhstan needs to prepare the registration file, in which programmes and strategies for every industry included in the event will be shown.

In 2013 we plan to prepare the registration file, and as well as this we will take part in forums and conferences in Kazakhstan and abroad, as set out by the National Plan.

How many visitors are you expecting during EXPO 2017?

During the bid for EXPO 2017 we carried out market research, studying the experience of the Zaragoza 2008, Shanghai 2010 and Yeosu 2012 exhibitions. Taking into account Kazakhstan's climate and the possibilities offered by airports in Astana, Almaty and nearby cities, rail transport, and events taking place at the same time as the exhibition, an average visitor total was obtained for EXPO 2017 in Astana – according to preliminary forecasts, we are expecting between 2 million and 3 million people.

How do you plan to attract international exhibitors and tourists?

To do this, we will hold an active promotional campaign abroad. One of the main areas of this campaign will be participation in international forums and conferences. With this we can ensure that the EXPO 2017 brand is well known and significantly increase Kazakhstan's appeal to tourists.

So, participation in future energy-related international events such as the European Energy Forum and the World Future Energy Summit in Abu Dhabi has become a tradition for our country.

This year, EXPO 2017 will be presented at the World Energy Congress in South Korea and also at greenEXPO 2013 in Vienna.

In the summer, an international cycling race using solar panels is planned. It is an unprecedented event, and it will also be a good opportunity to bring global attention to alternative energy.

Speaking of themed events in Kazakhstan, we will take part in events organised by our Ministry (of Industry and New Technologies) – we will present the EXPO 2017 brand at international travel exhibitions together with the Tourism Industry Committee of the Ministry of Industry and

New Technologies of the Republic of Kazakhstan. We also have plans to participate in innovation forums and in the Kazakhstan Industrialisation Days.

What will the EXPO bring to the country's economy and inhabitants?

EXPO 2017 is a big event that will be a powerful catalyst for development of the country and the region as a whole. For Kazakhstan, EXPO will mean an enormous flow of investment into construction of exhibition facilities and infrastructure for the capital, development of domestic tourism, large-scale partnership between government and business, and global prominence for the city and the country.

According to our expectations, the exhibition in Astana will bring together over 100 exhibiting countries, including around 10 leading international organisations. Between 2 million and 3 million people will visit the pavilions over the three months. In all respects, EXPO 2017 can be a good chance for Kazakhstani entrepreneurs. At the same time, EXPO is an international news event.

Holding EXPO 2017 with the topic of Future Energy will help to attract new technologies and developments in this industry to Kazakhstan, and it will also give a boost to the development of scientific thought.

On the subject of our citizens, extra jobs and an opportunity to earn money will appear with the holding of EXPO. The exhibition will create 10,000 jobs, develop internal tourism, increase the flow of foreign tourists into the country, and mobilise Kazakhstan's economic and social resources.

For small and mid-sized business owners, the holding of EXPO 2017 in Astana can be a good opportunity to learn about and then use new energy-saving technologies, and also to search for investors and ideas for future business development.

For students and high school students, it is good language practice and an opportunity to get to know leading global scientific schools and find ideas for future professional development.
The exhibition will show the world the multinational culture, ancient history, art, traditions and hospitality of the Kazakhstanis, and increase Kazakhstan's recognisability and tourism appeal among the global community.

The World University Games will take place in Almaty in 2017, and it is symbolic that this is the same year that Astana will celebrate its 20th anniversary. It is an important year for our country, and one which is packed with events.