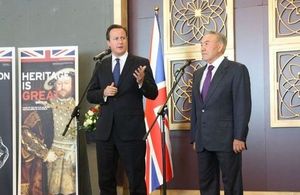 Prime Minister David Cameron became the first British premier to visit Kazakhstan when he touched down there on 30 June. A business delegation of 30 small and large companies from a diverse range of sectors including energy, high tech manufacturing, education, architecture and financial and professional services sectors have joined the Prime Minister for this historic trip.

The UK and Kazakhstan already enjoy a strong trade and investment relationship based on free market access, significant two-way trade and regular dialogue at senior levels. The UK is one of the largest investors in Kazakhstan, having provided almost £10 billion of total foreign direct investment since the country's independence in 1991. UK exports to Kazakhstan in 2012 were valued at £375 million, but the country remains a source of untapped potential.

"Kazakhstan is emerging as the dominant economy in central Asia and offers many opportunities for British businesses small and large across a wide variety of sectors. This first ever trade delegation led by a British Prime Minister demonstrates our commitment to strengthen the trade and investment links between our two countries."

Since 2000, the economy of Kazakhstan has been one of the ten highest performing economies in the world. The World Bank predicts that it will become a high income country by the end of the decade.