$ 39 billion will be invested in the construction of roads and railways in the framework of CAREC, ADB President Takehiko Nakao said during a briefing after the XII Ministerial Conference on Central Asia Regional Economic Cooperation, BNews.kz correspondent reports. 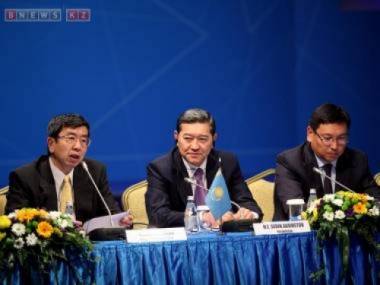 "We had a discussion. We were able to agree on a new strategy for the Transport and Trade Facilitation Strategy till 2020. As part of this new investment strategy of the CAREC Program, 39 billion dollars will be allocated to the railways, roads, objects that are related to trade facilitation such as customs procedures, and so forth," Takehiko Nakao said.

According to him, this will be added to $ 22 billion that has already been invested in the frame of CAREC initiatives. The ADB contribution in the form of loans and grants amounted to $ 8 billion out of $ 22 billion .

"Kazakhstan is such an important country in the framework of CAREC initiatives that Kazakhstan is allocated approximately $ 8 billion and 1.6 billion of which is the contribution of ADB," the President of the ADB Takehiko Nakao said.