The inauguration of the UK-Kazakhstan Inter-Governmental Commission (IGC) took place at Foreign and Commonwealth Office in London on 30 October 2013. 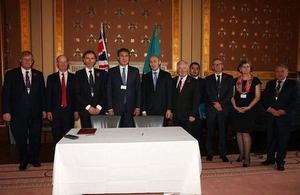 The Kazakhstani side was represented by: Asset Issekeshev, Deputy Prime Minister; Kairat Kelimbetov, Chairman of the National Bank; and a wider delegation. Lord Green, Minister for Trade and Investment; David Willetts, Minister of State for Universities and Science; other UK Ministers; Charles Hendry, the Prime Minister's Trade Envoy to Kazakhstan; Sir David Wootton, Co-Chairman of the Kazakh-British Trade and Industry Council; and over 40 UK companies attended for the British side.

The establishment of this Commission was proposed when the British Prime Minister David Cameron and the President of the Republic of Kazakhstan Nursultan Nazarbayev met during the Prime Minister's visit to Kazakhstan on 30 June-1 July 2013. It is aimed at providing a senior government to government dialogue for stronger business engagement. The IGC will focus on three areas of economic activity:

Speaking about this event, the Charge d'Affaires at the British Embassy, Greg Quinn said:

"This is an important day. The Inter-Governmental Commission was proposed during a meeting between the Prime Minister and President in Astana in July. It will provide a forum for discussion of key issues in the UK-Kazakhstan relationship such as: stronger business to business engagement; education; science, innovation and culture; and energy. It will be an important tool in delivering what our respective leaders expect following the Prime Minister's landmark visit."