Huge export opportunities for the UK have been identified in Kazakhstan, according to UK Trade & Industry (UKTI). 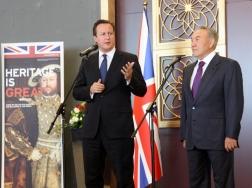 It said that a joint UKTI campaign with the Foreign & Commonwealth office led to £1.5bn of contract wins for British business in Kazakhstan during 2013. A visit by prime minister David Cameron delivered business deals worth more than £700m with a further £915m won since then.

Kazakhstan is an emerging economic power which is rapidly joining the ranks of the world's leading oil exporters.There are also a number of international events that Kazakhstan will host in the next five years, including Expo 2017 and the Student Winter Games. The country is also bidding for the Winter Olympics in 2022. Expo 2017 in particular will transform much of the capital city, Astana. UKTI said that it presents major opportunities in infrastructure development, drawing on UK expertise from the London Olympics, as well as renewable and green energy, security, financing and smart-city development.