On his visit to the Netherlands to attend the global nuclear security summit in the Hague, Kazakhstan's President Nursultan Nazarbayev has met His Majesty King of the Netherlands Willem-Alexander, Prime Minister Mark Rutte, and Chinese President Xi Jinping, according to the President's Press Service. 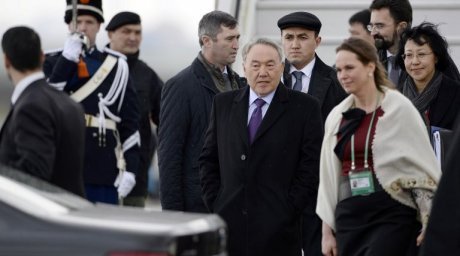 In the talks with Prime Minister Mark Rutte, the sides dwelt on a wide range of bilateral cooperation and major issues on the international agenda, including the situation in Ukraine. Among other things, they discussed nuclear disarmament, possibilities to expand the trade and economic, investments, technology and energy cooperation, and the program of the nuclear security summit in the Hague.

President Nazarbayev emphasized that the Netherlands are a major partner in the EU: the nation is ranked 1st in terms of investments into the Kazakh economy and a leading place among trade partners. Kazakhstan is home to about 800 companies with Dutch capital participation.

Nazarbayev highlighted importance of cooperation in agriculture and new innovation-driven industries and called Dutch companies to actively participate in the EXPO-2017 to be held in Astana, the country's capital city. The sides discussed environment issues, effective management of water resources, unleashing of transit potential and logistics infrastructure of the two nations.

Following the talks, the sides signed an MoU on political consultations between the two foreign ministries and an agreement to launch a Kazakh-Dutch Business Council.

At the talks with His Majesty King of the Netherlands Willem-Alexander the sides broached prospects of deepening bilateral cooperation between the two nations, including in culture realm. The King highlighted the great contribution made by Kazakhstan into the global nuclear safety and security.

At the talks with Chinese President Xi Jinping the two heads focused on main directions to expand the bilateral cooperation between the two nations, as well as the status of agreements reached on the state visit of Xi Jinping to Kazakhstan. The sides also dwelt on key issues on the international agendam including the forthcoming summit of the Conference on Interaction and Confidence Building Measures in Asia (CICA) to be held in Shanghai and the current situation in Ukraine. They also broached ways to strengthen ties in transit, water and energy, and technology spheres.